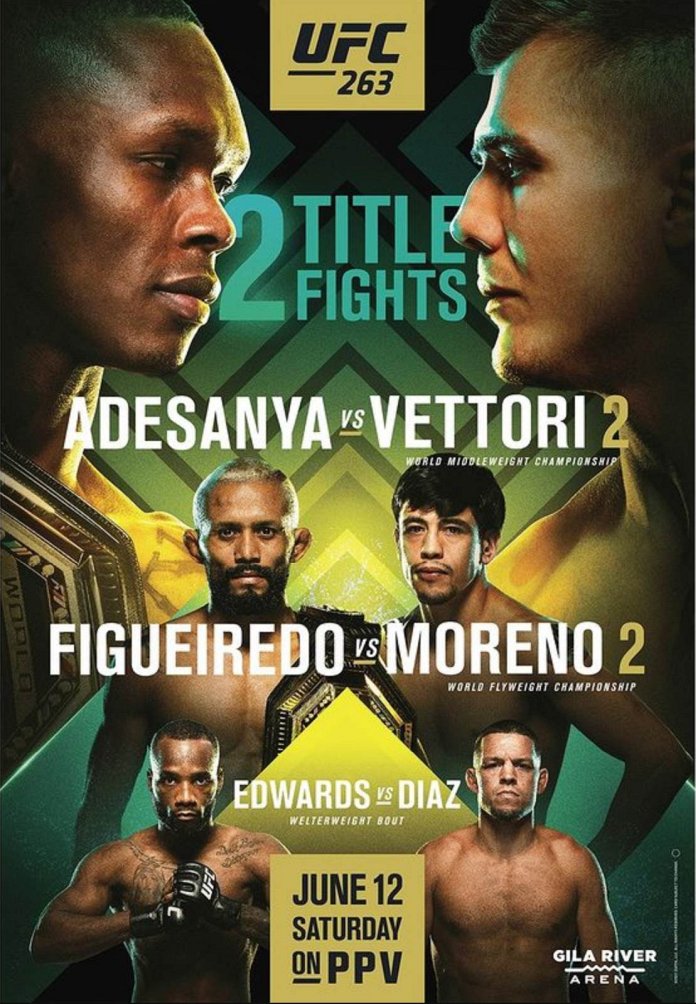 UFC 263: Adesanya vs. Vettori 2 is scheduled to take place on Saturday, June 12, 2021, in Glendale, Arizona, USA. In one of the matchups on the fight card, Deiveson “Deus da Guerra” Figueiredo will take on Brandon “The Assassin Baby” Moreno in the UFC Flyweight Title Bout. You can view the full UFC 263 card.

In this post, we will break down Deiveson Figueiredo vs. Brandon Moreno matchup. Let’s take look at the fighter’s ages, their height, records, reach, fight stats and more below ⤵

The 34-year-old, Deiveson Figueiredo is coming in with a 20-1-1 record. Figueiredo will be fighting for the first time since a draw via Majority draw against Brandon Moreno at UFC 256: Figueiredo vs. Moreno in December.

Moreno, meanwhile, is coming off a Majority draw draw against Deiveson Figueiredo on December 12, 2020 at UFC 256: Figueiredo vs. Moreno and holds a 18-5-2 record.

Figueiredo comes in with 56% striking accuracy, typically landing about 3.38 significant strikes every minute. On the other side, Moreno fires at 38% accuracy, landing about 3.41 significant strikes per minute. Deiveson Figueiredo also has a 50% takedown accuracy and on average gets around 1.57 takedowns every 15 minutes, compared to Moreno’s 2.01 takedowns and 67% takedown accuracy.

Brandon spent on average 14:09 minutes in the Octagon and Deiveson has an average fight time of 10:24 minutes.

This looks like an fun matchup, at least on paper. UFC 263 is live in , who do you think will win, Deiveson or Brandon? Sound off in the comments.