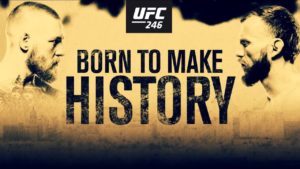 The UFC will be kicking off the New Year with a bang. The UFC has already announced few huge PPV events that are slacked along with a few other main cards. Let’s take a look at the 5 biggest fights the first half of the year has to offer.

I could not be more excited for the highly anticipated return of the “Notorious” Conor McGregor. A layoff of over a year and issues outside the cage has not stopped Conor McGregor’s fame to drop. Say what you want about the man, but he is by far the biggest draw in all of MMA.
This bout makes sense for many reasons. First I think Cerrone deserves his payday. The man holds numerous UFC records and has been a class act throughout his career. For Conor, this is a great warm-up fight back to the octagon. I’m not saying Cerrone doesn’t have a shot but Conor calculated Donald as his opponent. A 4th round submission by Khabib Nurmagomedov and the post-fight melee that ensued at UFC 229 was the last we saw of Mcgregor. Cerrone, on the other hand, fought 4 times in 2019 going 2-2.

The bout will be at Welterweight which Conor is 1-1, both against Nate Diaz. Cerrone is the bigger man and is the better fighter on the ground. John Kavanaugh, McGregor’s longtime coach stated that this is the best Conor he has seen. If that’s the case I think McGregor takes this fight, perhaps setting up a BMF title fight with Jorge Masvidal? 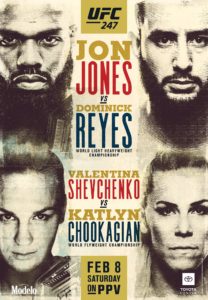 When this fight was announced I wasn’t all that convinced that this would be a Jon Jones fight I would be looking forward to. I watched some clips of Dominique Reyes and he may be the most athletic man to step in the ring with Jon Jones.

Physically Reyes matches the physique of Jon Jones. But so did Anthony Smith and Alexander Gustafsson who Jones defeated twice. I expect to see a more focused Jon Jones. His last bout against Thiago Santos was a bit lackluster in my opinion. He didn’t shoot for takedowns and kept the fight on the feet with Santos who has 1 punch KO power. Dominque Reyes looked impressive in his last fight against former middleweight champion Chris Weidman which ended in a 1st round TKO.

I just don’t see Jon Jones losing. The guy’s fight IQ is at another level and Jones is the better fighter all around here. Reyes may be athletic, but let’s not forget Jones is an elite athlete as well. I would love to see Jones go for a finish here and continue his legacy as being the greatest of all time.

This may be the most anticipated fight in UFC history. I am very excited about this fight and you can be sure I’ll be at the Barclays Center April 18th for this fight. We all are hoping that both men remain healthy come fight week. These two have been scheduled to meet 4 times in the past but health issues on both sides caused the fights to be canceled.

On paper, these two fighters seem near identical. Ferguson is the scrappier fighter while Khabib is very disciplined. Nurmagomedov’s wrestling is probably the best the UFC has seen in quite some time. Once he gets his opponents on the ground his ground game is just exceptional. We saw this against Conor McGregor and Dustin Poirier. Ferguson’s endurance is phenomenal. He always will get his opponents’ faces and is not afraid to take the fight anywhere. Ferguson has the wrestling, striking and jujitsu to give Khabib a run for his money. Could the winner of this fight possibly be the greatest lightweight of all time? 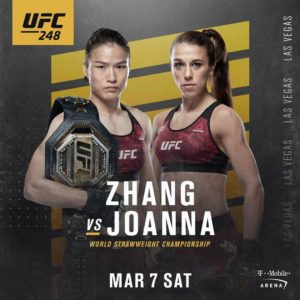 Newly crowned Strawweight Champion and China’s 1st ever UFC Champion Zhang Weili’s first title defense will be against former champion and fan-favorite Joanna Jedrzejczyk. Weili made it clear she wanted to fight anyone and the UFC granted that wish giving her the toughest test possible.

Weili’s strength and power were evident in her TKO of Jessica Andrade. Joanna I believe is the more technical fighter who will likely look to throw counter punches. Weili is the stronger looking figure but this is not the 1st time Joanna will have faced an opponent of this sort. Jedrzejczyk’s has plenty of experience in big title fights which Weili quite hasn’t accumulated yet.

If Weili can pull a victory the biggest winner will be the UFC. I just think that Weili’s stardom in China will grow even more. She already has a huge following in China and a win over a star-like Jedrzejczyk can only elevate the UFC’s brand in China.

This will be the toughest matchup in Maycee Barber’s career. The 21-year-old Barber will be facing off against the most veteran fighter in the flyweight division, 37-year-old Modafferi. Barber had a great 2019 with 3 victories all by stoppage. Modafferi has proven to be incredibly tough to put away in her 16-year career, suffering only 4 losses by stoppage.

I expect Modafferi to wrestle which is her strong point. Ben Askren has been training Maycee Barber and it would be great to see Barber show off some of the high-level training. This fight will be a very big indicator in proving to the world if Maycee Barber can continue her quest to become the youngest ever UFC champion.