UFC light heavyweight champion Jon “Bones” Jones is back in the headlines for the wrong reason. MMA Fighting’s Damon Martin reports that Jones was arrested this morning for aggravated DWI and negligent use of a firearm, possession of an open container and driving with no proof of insurance by Albuquerque police at 1 am local time. Martin also reports that Jones has been released from custody. Jones took a sobriety test that he failed poorly according to reports. He also took a breathalyzer test that showed he was at or above twice the legal limit.

This is Jones’s arrest record that was first obtained by MMA Fighting. 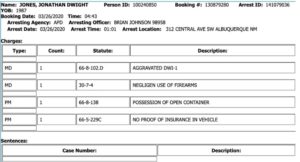 This marks the third time Jones has gotten in trouble behind the vehicle. On May 19, 2012, Jones was arrested and charged with driving under the influence when he smashed his Bentley into a pole. Jones plead guilty, paid a fine and had his drivers licensed suspended. On April 27, 2015, Jones was arrested for being involved with a hit and run that resulted in him pleading guilty and faced 18-month probation.

Blessed be the LORD my Rock, Who trains my hands for war.

Jones has been trying to stay out of trouble and remain active in the UFC. Jones was suspended from the UFC for over a year when he tested positive for turinabol on August 22, 2017. He came back to defeat Alexander Gustaffson for the vacant light heavyweight championship at UFC 232 on December 29, 2018. The champion has been active and since his return has beaten Anthony Smith, Thiago Santos and most recently Dominick Reyes. Jones has yet to release a statement on his recent arrest. The UFC has released a statement through ESPN’s Brett Okamoto. 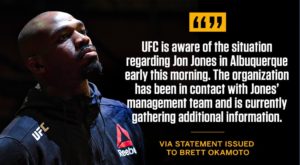 Tyriece Simon
I am a MMA reporter and writer. Host of MMA Renegade on Renegade Sports Youtube Channel.