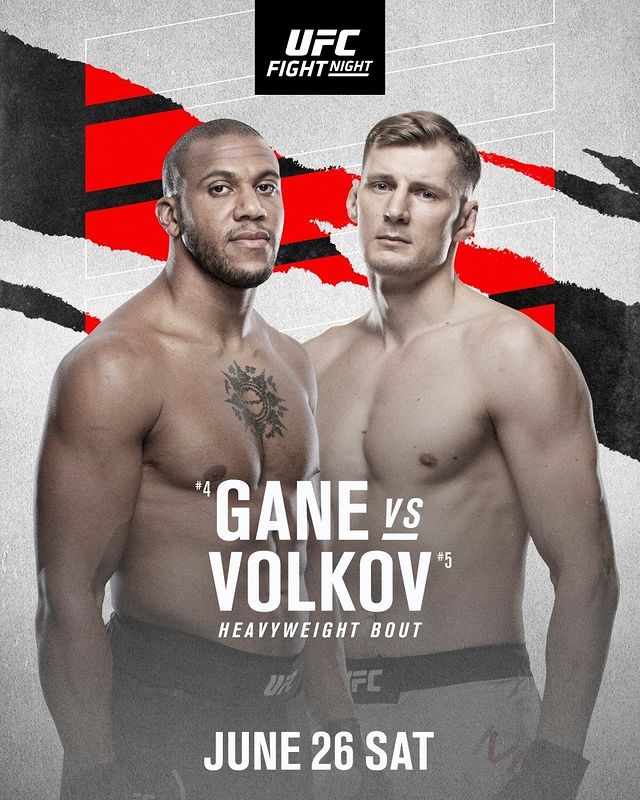 Heavyweight contenders Ciryl Gane and Alexander Volkov will collide in the UFC Fight Night main event at the UFC Apex in Las Vegas on June 26.

Gane, 31, has established himself as a potential title challenger in the future by accruing a perfect 8-0 record heading into his fight with Volkov, six of those wins coming inside the distance.

The Frenchman only began his professional mixed martial arts (MMA) career in 2018, and within a year was scooped up by the UFC. In his most recent bout, back in February, Gane outpointed Jairzinho Rozenstruik over five fairly pedestrian rounds.

While the win moved Gane further up the rankings, he failed to impress UFC President Dana White and many portions of fans with his performance. Prior to that victory, however, he stopped Brazilian legend Junior dos Santos in December 2020; the first major scalp of his fledgling career.

That kickboxing-style background is evident in his striking today, as Gane using technical skill and precision with punches, kicks, knees and elbows to break opponents down and create openings.

He also has a solid defence as well as a dangerous submission game, making him an effective all-rounder, though he does his best work on the feet.

Gane might just be the best kicker in the heavyweight division, using speed and athleticism to bludgeon the fighters in front of him. In fact, his Muay Thai experience shines the most through his front kick, which he pistons into people’s midsections, winding them and causing them to back off.

He had previously accepted a callout from fellow contender Derrick Lewis, however the American now looks set to take a crack at Ngannou’s title sometime this year. Clearly, Gane is en-route to a title shot if he can keep winning, especially if Francis is still champion, but Volkov presents a sizable hurdle to clear.

Emphasis should be placed on the word ‘sizable’, as the towering Russian is one of the tallest fighters currently competing in the UFC, and he regularly uses that to his advantage. At 6’7’’ and with an 80’’ reach, the 32-year-old uses his range to keep himself out of harm’s way while still being able to land on his opponents.

A 12-year veteran of 41 fights, Volkov – like Gane – finds himself within touching distance of his first ever UFC title shot off the back of two impressive wins. In October of last year, Volkov dispatched Walt Harris in two rounds.

However, it was in February of this year that he truly planted himself into the title contender conversation when he stopped former title challenger Alistair Overeem, also in the second round.

Prior to that, he had lost two of his last three fights, dropping a decision to Curtis Blaydes and being stopped with punches by Lewis.

How are Gane and Volkov similar?

The similarities between Gane and Volkov are quite clear; both are technical strikers with solid kickboxing backgrounds. The latter fights well off the front foot but has also proven himself a capable counterpuncher.

Like many Eastern-European fighters, he keeps his stance fairly square-on but this allows him to launch attacks with either side of his body. Though predominantly an orthodox fighter, Volkov has been known to strike from the southpaw stance also.

Typically, wrestling and grappling has been a strong foil of Volkov’s – his takedown defence sits at 66%, whereas Gane has never been taken down – though against Blaydes, the Russian did display more urgency to get up off the mat.

However, when he finds himself on his back, he can be fairly passive and easy to control. That being said, Gane is not known for his grappling and takedowns, so it’s likely this fight will stay on the feet.

Who is the favorite to win?

Gane is a fairly comfortable favorite with most sportsbooks, floating between -145 and -150. DraftKings, for example, are offering the Frenchman at -148 while FanDuel have him set at -144.

Volkov, the underdog, has odds of +120 at most bookies, including both DraftKings and FanDuel. Some, like BetMGM, have him at +120.

Gane’s unbeaten record and recent wins over dos Santos and Rozenstruik appear to be enough to make him a clear favorite, though most bookies still see this as a close fight on paper. Most MMA fanatics will be keeping an eye on the odds and placing a bet on the upcoming fight night especially as more countries including USA and Canada have legalised the use of sportsbooks in their countries. This has meant that there has been an increased number of sports bets placed on major fight nights like the upcoming Gane vs Volkov.

Both men are adept strikers and have shown they can finish fights in a variety of ways, making it difficult to give a confident prediction.

The attention on a UFC Fight Night headlined by two solid but relatively lesser-known heavyweights is proof of how popular MMA has become in recent years. The UFC in particular has become the world’s leading fight promotion, boasting stars like Conor McGregor and the recently retired Khabib Nurmagomedov.

Gane and Volkov both find themselves tantalisingly close to earning a chance at UFC gold, making this clash between seasoned kickboxers a fascinating one.