Dustin Poirier looks to be ready to get back into the Octagon after a career-best 2019 campaign. Poirier claimed the interim lightweight championship with a victory over Max Holloway at UFC 236. Upon capturing the lightweight title Poirier fought Khabib Nurmagomedov at UFC 242. The result didn’t go Poirer’s way as he lost via rear-naked choke in the 3rd round.

It’s no surprise Poirier is calling for Diaz. The two were scheduled to square off as the UFC 230 co-main event at MSG but Poirier was forced to withdraw with a hip injury. Poirier made it clear that fighting Diaz is still on the top of his radar. 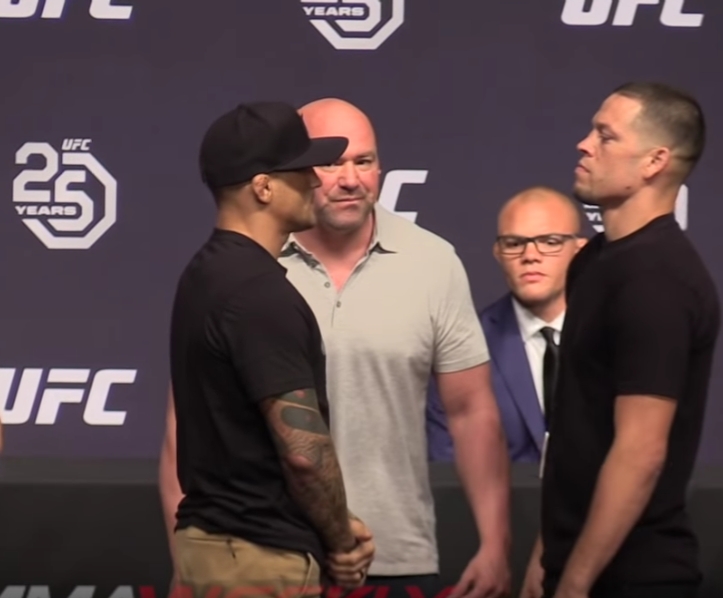 “Whether I like the guy or not, I’m a fan. I think it would be an incredible fight. That’s why I want to fight him because I grew up watching the guy fight.”

“Of course I would love that fight. He’s a guy that I’ve always to battle with. I want to fight guys I’m excited to watch the fight. Any time Nate Diaz fights, I’m tuning in, I promise you.”

Furthermore, Poirier added a twist with a potential bout with Nate Diaz. Poirier would love his American Top Team teammate Jorge Masvidal on the same card.

“I train with Jorge, so it makes sense. American Top Team versus the Nick Diaz Academy.”

Following Jorge Masvidal’s 3rd round TKO over Nate Diaz at UFC 244 there have been strong rumors that Masvidal could square off against Nick Diaz who is the older brother of Nate. Nick Diaz has been out of the Octagon for 4 years but asides of inactivity publicly stated he wants the fight at Masvidal at Cowboy Stadium.

Could we see an American Top Team vs Nick Diaz Army at Cowboy Stadium this year?