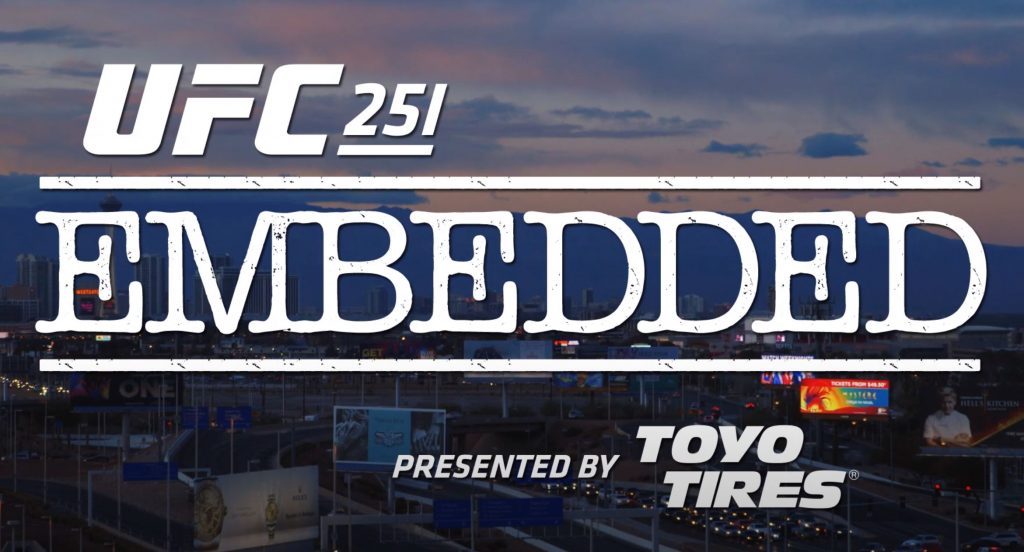 UFC 251: Usman vs. Masvidal is approaching and the company has started to release its trademark vlog series ‘UFC Embedded’. UFC 251 Embedded goes behind-the-scenes into the final week of Kamaru Usman, Jorge Masvidal, Alexander Volkanovski, and Max Holloway, as they prepare for the biggest fights of their lives. Go inside the fighter’s lives, training camps and final preparation for UFC 251, which takes place this Saturday (Jul 11, 2020). Watch all the UFC 251 Embedded episodes below!

You can watch the rest of Embedded videos for UFC 251 below as soon as they are released. This page will be automatically updated with the latest UFC Embedded episodes once they are released by UFC. Bookmark this page and come back daily to view the next episode. Please note: If you see an episode from the past UFC event, this means the Embedded episode for the UFC 251 is not released yet, so check back in soon.

The typical UFC Embedded episodes schedule starts a week before the PPV event, starting on Monday with episode 1 and a new video coming out daily until the day before the fight (Friday).

Episode 2 will be released on Tuesday.

Episode 3 will be released on Wednesday.

Episode 4 will be released on Thursday.

Episode 5 will be released on Friday.