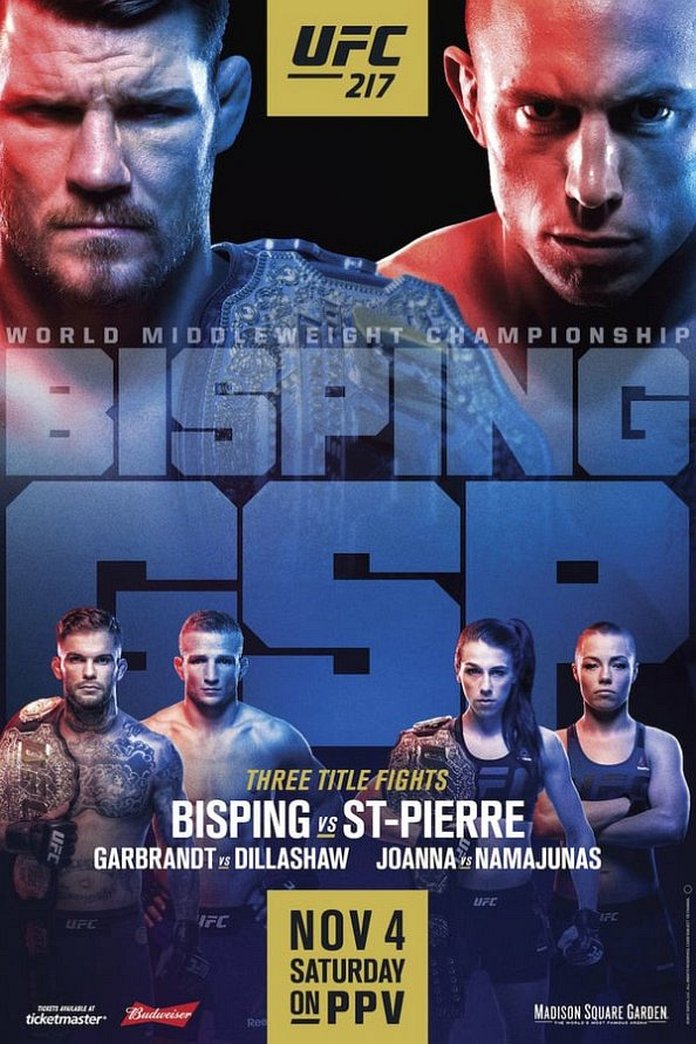 UFC 217: Bisping vs. St-Pierre was held on Saturday, November 4, 2017, at Madison Square Garden in New York City, New York. This event was held 1,889 days days ago and was the 416th event in Ultimate Fighting Championship history, including pay-per-views, UFC Fight Nights, and The Ultimate Fighter season finales. There were 18,201 fans in attendance. The gate for the event came out to $6,200,000.

UFC 217 had 11 bouts scheduled. The event was headlined by a clash between Georges St. Pierre and Michael Bisping. In the co-main event, T.J. Dillashaw took on Cody Garbrandt. The night kicked off with Ricardo Ramos taking on Aiemann Zahabi, followed by Alexey Oleynik vs. Curtis Blaydes. No one was awarded Fight of the Night bonus. The Performance of the Night bonuses went to Georges St-Pierre, Ovince Saint Preux, T.J. Dillashaw and Ricardo Ramos, each fighter took home an extra $50,000.

View the UFC 217 fight card and bout order for ‘Bisping vs. St-Pierre’ below. Don’t miss the complete UFC 217 results.

The card aired on PPV in the United States. Below is the UFC 217 fight card and 11-fight order for ‘Bisping vs. St-Pierre’.

This page is updated with the latest details about UFC 217, come back often for new updates. If you see a mistake, please help us fix it.