UFC 245 Results for Usman vs. Covington 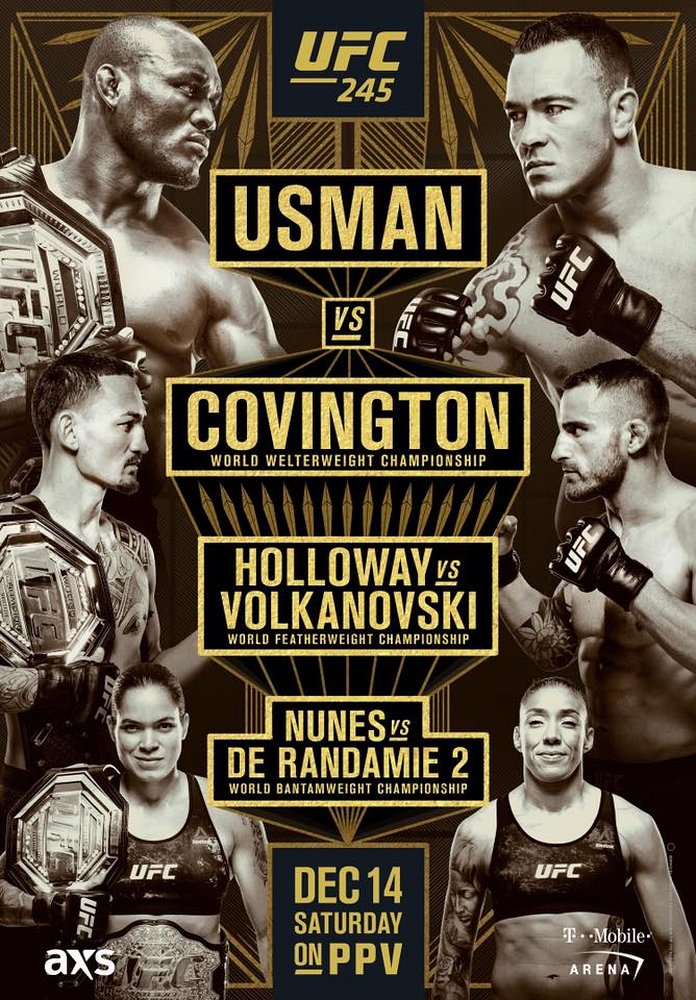 Kamaru Usman returned to the UFC Octagon saturday night for UFC 245 to take on Colby Covington. The event took place on Saturday, December 14, 2019, at the T-Mobile Arena in Las Vegas, Nevada. Usman vs. Covington featured 13 bouts, some were more exciting to watch than others.

UFC 245 was headlined by a scrap between Kamaru Usman and Colby Covington, with Alexander Volkanovski vs. Max Holloway serving as the night’s co-main event. Elsewhere on the card, Omari Akhmedov went to battle against Ian Heinisch. Let’s find out who won at the UFC 245. View the full results for ‘Usman vs. Covington’-led fight card below.

UFC 245 was live 1,120 days days ago and was the 504th event in UFC history, including pay-per-views, UFC Fight Nights, and The Ultimate Fighter season finales.

Below is the 13-fight order and UFC 245 results. Here are the real winners and losers from Saturday‘s event:

The results are listed in ascending order, starting from the first fight ending with the night’s main event. Be sure to check out UFC 245 payouts and bonuses.

The second fight at UFC 245 was Viviane Araujo vs. Jessica Eye. Jessica Eye won in Round 3 at 5:00 by Decision (Unanimous).

In the fourth bout, Chase Hooper defeated Daniel Teymur by TKO (Punches) at 4:34 of Round 1.

The fifth bout ended at 4:55 of Round 2 with Matt Brown defeating Ben Saunders by KO (Elbows).

In sixth fight of the night, Ian Heinisch lost to Omari Akhmedov at 5:00 of Round 3.

Irene Aldana got the better of Ketlen Vieira and won by KO (Punch) in Round 1 at 4:51.

The eight bout was between Mike Perry and Geoff Neal. Geoff Neal beat Mike Perry by TKO (Punches) at 1:30 of Round 1.

In the tenth bout, Marlon Moraes battled Jose Aldo and took the win by Decision (Split) in Round 3 at 5:00.

Right before the co-main event, Amanda Nunes prevailed over Germaine de Randamie. Amanda Nunes won by Decision (Unanimous) at 5:00 of Round 5.

In the co-main event Alexander Volkanovski defeated Max Holloway via Decision (Unanimous) at 5:00 of Round 5; Jason Herzog was the third man in the cage.

In the main event, referee Marc Goddard called an end to the bout at 4:10 of Round 5. Kamaru Usman defeated Colby Covington by TKO (Punches).

This page is updated with new details on UFC 245 event, so come back soon for fresh updates. If you see a mistake, please submit a correction and help us fix it.