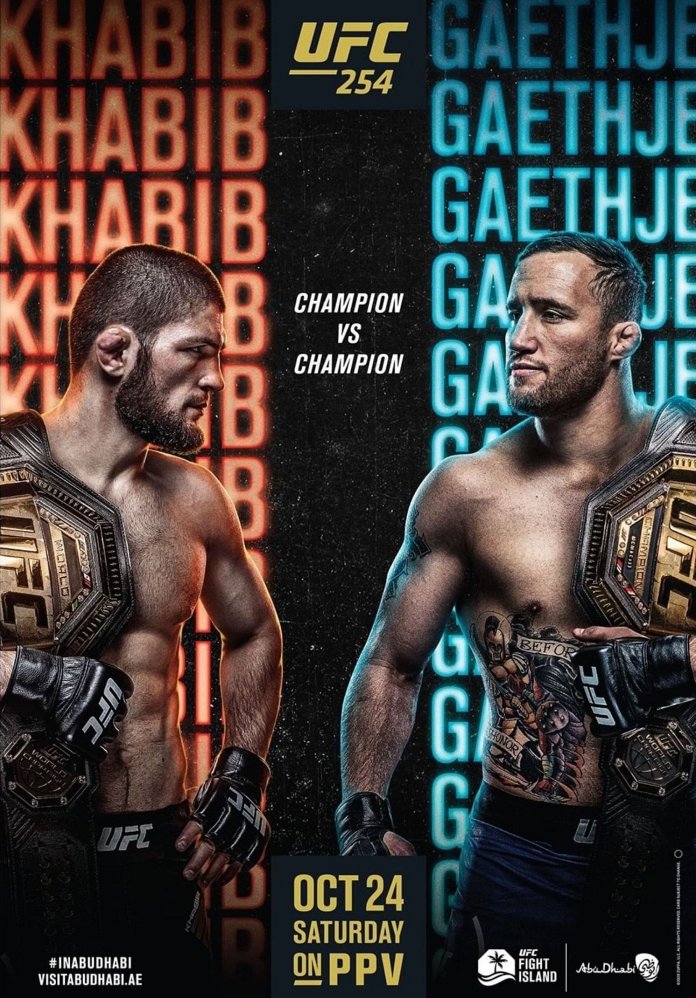 Khabib Nurmagomedov returned to the UFC Octagon saturday night for UFC 254 to face Justin Gaethje. The event took place on Saturday, October 24, 2020, at the UFC Fight Island in Yas Island, Abu Dhabi, United Arab Emirates. Nurmagomedov vs. Gaethje featured 12 bouts, some were more exciting to watch than others.

UFC 254 was headlined by a scrap between Khabib Nurmagomedov and Justin Gaethje, with Robert Whittaker vs. Jared Cannonier serving as the night’s co-main event. Elsewhere on the card, Tai Tuivasa went to battle against Stefan Struve. Let’s find out who won at the UFC 254. View the full results for ‘Nurmagomedov vs. Gaethje’-led fight card below.

UFC 254 was live 171 days days ago and was the 537th event in UFC history, including pay-per-views, UFC Fight Nights, and The Ultimate Fighter season finales.

Below is the 12-fight order and UFC 254 results. Here are the real winners and losers from Saturday‘s event:

The results are listed in ascending order, starting from the first fight ending with the night’s main event. Be sure to check out UFC 254 payouts and bonuses.

The following fight was between Sam Alvey and Da Un Jung. Da Un Jung beat Sam Alvey by Draw (Split) in Round 3 at 5:00.

In the fourth bout, Shavkat Rakhmonov defeated Alex Oliveira by Submission (Guillotine Choke) at 4:40 of Round 1.

The fifth bout ended at 5:00 of Round 3 with Casey Kenney defeating Nathaniel Wood by Decision (Unanimous).

In sixth fight of the night, Stefan Struve lost to Tai Tuivasa at 4:59 of Round 1.

Magomed Ankalaev got the better of Ion Cutelaba and won by KO (Punches) in Round 1 at 4:19.

In the tenth bout, Alexander Volkov battled Walt Harris and took the win by TKO (Body Kick and Punches) in Round 2 at 1:15.

In the co-main event Robert Whittaker defeated Jared Cannonier via Decision (Unanimous) at 5:00 of Round 3; Anders Ohlsson was the third man in the cage.

In the main event, referee Jason Herzog called an end to the bout at 1:34 of Round 2. Khabib Nurmagomedov defeated Justin Gaethje by Technical Submission (Triangle Choke).

This page is updated with new details on UFC 254 event, so come back soon for fresh updates. If you see a mistake, please submit a correction and help us fix it.